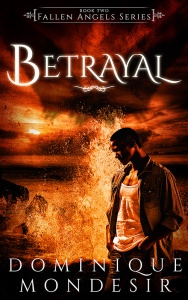 Out on the 20th of this month, will be the second instalment of my Fallen Angels series. It is available on Kobo, Barnes&Noble, Ibooks, and Amazon for pre-order. If you like dark fantasy, action, and angels you will love this series. It also has a little bit of romance thrown in for good measure. If it sounds like your thing, give the first book in the series a try.

Below is the first scene, of the second book.

From the depths of a pocket, a sound began to emerge. It started off slow and faint, but just as a ticking time bomb had the power to silence a room, so did this sound.

In a wild panic, Hugo looked at Jabor. They exchanged looks, neither wanting to meet the other’s eye. They both knew what the sound meant, but admitting that to the other would show signs of fear. The faint ring seemed to turn into a deafening gong. Each stroke of the gong grew louder and louder; the sound found every space, hole, nook, and cranny. It spread its vibrations like tentacles in the darkness, eliminating the silence with sound.

“Let it go to voicemail, my friend,” Jabor said.

“And have to call him back?” asked Hugo in a panicked voice.

“By the gods, you do not want him calling back, a second time. I don’t think he ever has for anyone. Pick it up, like a Band-Aid. The pain only lasts for a second.”

“That all depends on who’s experiencing the pain,” Hugo remarked. “Hello?”

There was no answer on the line, only the faintest of crackles.

“Is it done?” was the only reply he got from the other end of the line.

There was a long pause, as Hugo tried to force his brain to work. He felt as if time had slowed down, as  a million things rushed through his head.

What should he say?

What was he meant to say?

The truth or lie?

How best should he play this, so the repercussions fell as far away from him as possible? He needed to think; he needed to turn this into a victory.

His throat and mouth were dry, but his hands were sweaty and moist. Weird, he thought; it normally should be the other way around.

He shot a glance at Jabor, who stared back at him, emotionless.

“Those two imbeciles who were sent ahead completely botched the operation. I have never seen such incompetence in all my life. They found the location where they were keeping him, but failed to secure or dispose of him. We arrived a little too late to save them. But we saw the party in question taking him away. We were just about to track them, before you called.”

Again, silence. This time it was worse, because there would be an outcome. On one side of the coin held light, hope and a future; they might be chastised, but it wouldn’t amount to much and they would survive. The other side of the coin held utter darkness. The pit of trouble they would find themselves in would be a bottomless one. No way out, no light to give them hope.

“I see,” said the voice on the other end.

“Yes, everything should be resolved sooner rather than later. As I said, we are now tracking them, so it shouldn’t take long to have this matter resolved,” said Hugo in a rushed voice.

The phone almost slipped out of his hand. He caught it in time, hurriedly placing it to his ear.

“You can count on us, sir,” Hugo assured the voice.

“Good, then make it so,” said the voice from the darkness before hanging up.